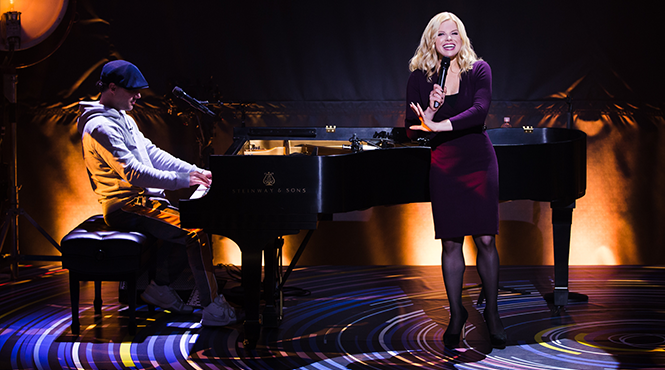 Megan Hilty shows us her vocals can pack a punch with her stunning performance of “Suddenly Seymour” alongside Josh Radnor in The Kennedy Center’s production of Little Shop of Horrors in 2018.

What do Marilyn Monroe and Megan Hilty have in common? Diamonds are their BEST FRIEND! Megan Hilty channels her inner Marilyn Monroe in her glittering performance of “Diamonds Are a Girl’s Best Friend” from the original 1949 Broadway production Gentlemen Prefer Blondes, which Marilyn Monroe famously sang in the film of the same title.

Megan Hilty shows off her soprano voice in a live performance at Lincoln Center with “I Could Have Danced All Night” from the 1956 Broadway musical My Fair Lady, which starred Julie Andrews.

From the same Lincoln Center concert, we could not leave out Megan Hilty’s performance with another Broadway Celebrates The Soraya performer, Eden Espinosa, in a musical they both had roles on Broadway in. Megan Hilty dazzles with “For Good” from the musical Wicked, alongside Eden Espinosa and Shoshana Bean.

What is our favorite Megan Hilty moment? It has to include Megan Hilty as the seasoned triple-threat Ivy Lynn from NBC’s hit musical drama series, SMASH. In a dress that resembles Dorothy’s ruby red slippers, Megan Hilty is a showstopper performing “Let’s Be Bad” in SMASH.