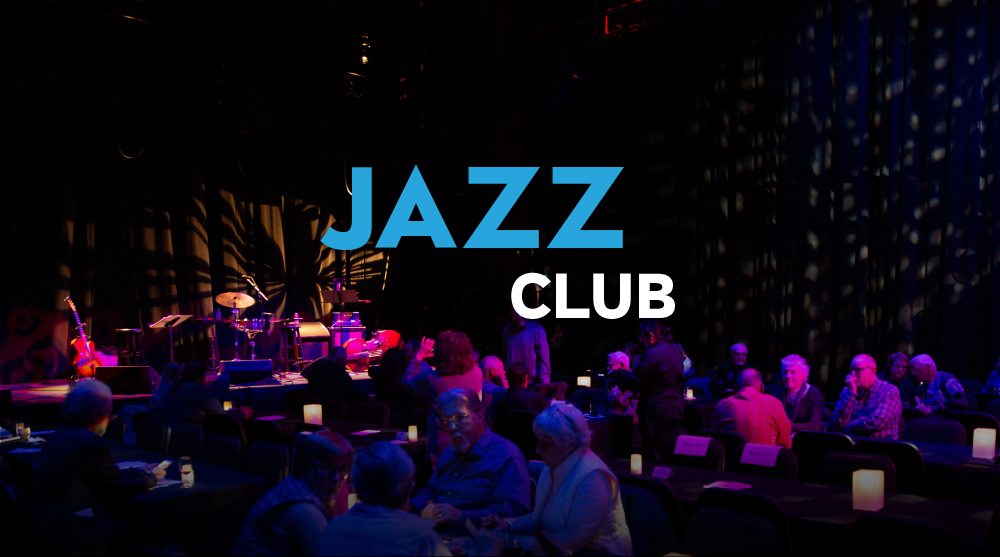 A trio of cutting-edge Jazz at Naz intimate concerts takes jazz’s temperature and points to the art form’s future. Hungry for the potent experience live music brings, Soraya jazz fans (safely distanced and masked) will encounter, over the course of one weekend, a blazing sextet, a sensual vocalist, and a scintillating up-and-coming pianist from Havana. The place to be is The Soraya, in the house’s jazz-club setting. In February, it will sizzle with some of the coolest—and hottest—jazz talent in the ether today.

Soraya Executive Director Thor Steingraber, who just shepherded The Soraya through its tenth anniversary season, is unequivocal in his support of jazz. “Los Angeles has been an unstable jazz market since Covid 19 hit,” he says, with obvious concern. “One glimmer of hope is the number of artists who’ve decided to make their homes here. I think we’re at an inflection point, and if the jazz venues don’t catch-up to the talent we have here, then shame on us.” Steingraber, an avid Dodger fan, puts it like this: “At The Soraya, we want L.A jazz to have a home team.”

Pianist/composer Gerald Clayton opens Jazz at Naz. Although born in The Netherlands, Clayton is of Los Angeles origin and upbringing. As versatile as he is accomplished, his immersion in the classical jazz repertory was on recent display at Disney Concert Hall in his concert with the Los Angeles Philharmonic playing the music of Duke Ellington. Under his own aegis, Clayton works with some of the most vital contemporary jazz musicians on both coasts. At The Soraya, he’ll front alto saxophonist Logan Richardson, tenor saxophonist Mark Turner, bassist Joshua Crumbly and drummer Justin Brown. They’re all familiar names in New York jazz and amazingly, like Clayton, they’re all in varying stages of relocating to Los Angeles.

Clayton was born to make music. Son of the celebrated bassist, composer and bandleader John Clayton, Gerald attended the Los Angeles County High School for the Arts. At USC, he studied intensively with pianist and composer Billy Childs. “Billy challenged me,” Clayton says. “He gave me assignments that were way out of my comfort zone. Write a string quartet? Really?!? My strengths (I always thought) have been as a player. But Billy gave me the courage to give composition a go.”

Clayton also worked one-on-one for a year with veteran pianist Kenny Barron at the Manhattan School of Music. “I had a lot of questions for Kenny,” he says, “but it always led to the piano. He’d say, ‘Man, just play.’ I think he has the best time of any pianist. When he puts his hands to the keyboard, he doesn’t have a single nerve in his body.”

The bands of the late trumpeter Roy Hargrove (who died in 2018) and tenor saxophone guru Charles Lloyd were tough proving grounds for the young Clayton. “The classroom is great,” Clayton says, “but I’ve been blessed by being around the elders of the music—pretty much since I was born. There’s nothing like getting your butt kicked on the bandstand. Roy was ferocious in taking us through the music. And with Charles, you always feel his love for Charlie Parker and Lester Young, and that rootedness to the blues.”

With his Sextet, the four-time Grammy-nominated Clayton is a bit like a musical lion tamer in a cage of big cats. His players are all mature stylists, and usually bandleaders themselves. “I don’t have to think too much about managing the music with these guys,” Clayton says. “My approach is about creating platforms where they can fly their own flags. I just let them go, and soak up as much of what they do as I can.”  Soraya jazz-niks may like to warm up with Clayton’s most recent album, Happening: Live at the Village Vanguard, which marks the beginning of his association with the Blue Note label.

Serendipity strikes when Gerald Clayton again appears at Jazz at Naz’s second concert, that of singer Gretchen Parlato. There is no sound in contemporary jazz like Parlato’s. Her mercurial timbre comes right out of the moment, and is acutely attuned to her collaborators—Clayton on piano, Ben Williams, and drummer Mark Giuliana, her husband. Improvisation is at the heart of her band dynamic. “You practice together,” she says, “and you develop a vocabulary surrounding the material. But you never know where it’s going onstage. It’s an incredible thrill to create with musicians like Gerald, Ben and Mark.”

Parlato grew up in the San Fernando Valley. Her father, David Parlato, was a working jazz bassist, recording in the Hollywood studios, and playing in the bands of Don Ellis and Frank Zappa. “I grew up in a very art-oriented family,” she says. “Everybody had some talent, and most everyone was an artist of some kind.” Parlato had one strong advantage, “My family actually saw music as a valid profession.”

After she became a fixture in New York City, Parlato sporadically appeared at SoCal venues. She came of age performing in Valley jazz clubs like Spazio, Ca Del Sole and La Ve Lee with pianist Guilherme Vergueiro and others. The grace and floating, linear freedom in Brazilian music is a part of her musical gestalt. In 2004, Parlato was the first vocalist accepted to the Thelonious Monk Jazz Competition, and she won first place in her category.

Studying earnestly with singer Tierney Sutton, Parlato learned that, “Tierney works from inside of the song. She taught me to find the center of the note, and to find the truth of my own voice. She never gave me a roadmap; she just let me find my own way.” Jazz Bakery owner and singer Ruth Price was another of her teachers. “Gretchen was in the first class I taught at UCLA,” Price says, “and I was immediately struck by her musicality. She was already so far ahead of the others.”

As part of the Monk Institute program (now the Herbie Hancock Institute) on the USC campus, Parlato interacted with the school’s music students, among them, Clayton. “Gerald was young,” she says, “but you knew that he was destined for big things.  When we were both on the New York scene, he was the pianist to call. And now we’re all back here.”

Parlato’s current album Flor (Edition) has garnered strong reviews and a Grammy nomination. It features redesigned songs by other composers, some piano cameo appearances from Clayton, and her original tunes. “I like to rearrange standards,” she says. “I’m a perfectionist, and it took me a long time to trust myself with lyric-writing. But if I lock myself long enough in a room with a piano, I always know when the words are right for the song.”

The series then taps the jazz scene in Cuba, where something in the water breeds monster musicians, particularly pianists.  Havana right now is positively teeming with exciting new music. Mass communication has opened Cuban musicians to the world. Musical inputs from Africa, the U.S., South America and Europe course through Havana’s bands these days. Nowhere is that more apparent than in the trio of keyboardist Harold López-Nussa. “It’s not just salsa, son, and mambo,” he says, on a Zoom call from his home in the Verdado neighborhood of Havana. “There’s so much going on here, in dance clubs and jam sessions, and it’s all very exciting.”

Soraya patrons will recall the López-Nussa Trio’s opening set in 2018 for Juan de Marco’s Afro-Cuban All Stars. Although he has appeared at the Playboy Jazz Festival, and a couple of forays at the late, lamented Blue Whale in downtown Los Angeles, the upcoming Soraya concert is López-Nussa’s most important Southland gig to date. His latest of three releases for the local Mack Avenue label, “Te Lo Dije” (Spanish for “Told you so”) should further strengthen López-Nussa’s ties here.

As with so many under-forty musicians, Harold López-Nussa’s music is a crossroads of styles. In his case, that means Cuban son, jazz, funk, Afro pop, and much more. Los Van Van, the hugely successful and influential Cuban band, innovated the songo rhythm, an important ingredient for López-Nussa’s music. He says, “Los Van Van, with their singer, Pedro Calvo, was the biggest thing in Cuba. They had big hit records that are still popular. I grew up hearing them, and bassist-leader Juan Formell put a stamp of quality on everything they did.”

One of López-Nussa’s most important piano inspirations is the late Chick Corea, who passed away last year. You hear it in his pianistic agility, but López-Nussa also took on board Corea’s omnivorous appetite for all kinds of music. “I come from a musical family,” López-Nussa says, “so I heard recordings that were hard to get in Cuba. Along with Herbie Hancock, Chick touched me deeply. I took a master class with him at the Montreux Jazz Festival. I’m still working on the material he showed me there. He was a jazz pianist, sure, but Chick always surprised us with where he went in his music.”

López-Nussa will be joined at The Soraya by bassist Luques Curtis and drummer Ruy López-Nussa, his younger brother. These three instrumental voices, through interacting and improvising, draw awe-inspiring levels of cross-fire. The technical virtuosity is on full display; but the playfulness and exultant dance rhythms are ever-present.

It’s too soon to know if the many jazz artists who are relocating to Southern California will lead to a seismic shift in the culture. But one thing is certain—the winds of change are blowing, and they’re at The Soraya’s back. “Jazz in L.A. needs a booster shot,” Steingraber says. “It’s time to make L.A. a jazz destination. Gerald and Gretchen and the others moving here are making that a reality.”