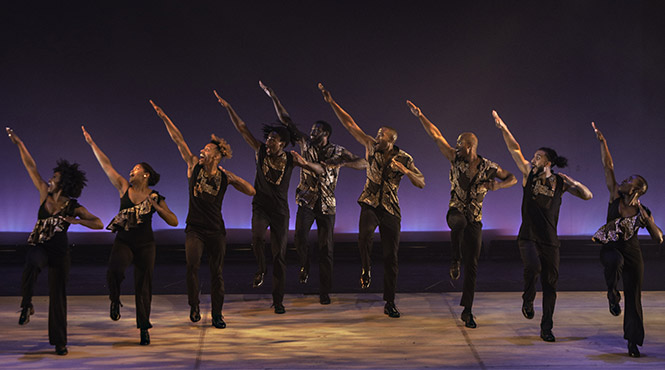 On Sacred Ground: Step Afrika! at The Soraya 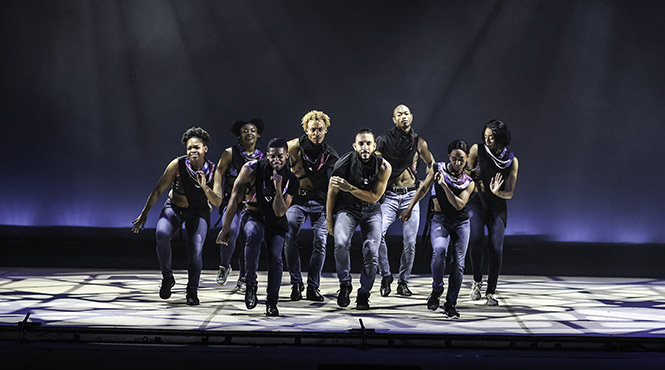 “We do hambone. We do stepping, patting, and juba,” says Executive Director C. Brian Williams, who founded Step Afrika 25 years ago. “But the ring shout dance is one of my favorites. It’s a sacred tradition; it is one of the very first African American art forms. Every time I see it, I get excited. Because we are preserving a part of history.”

The ring shout, a rhythmic and hypnotic group dance for men and women, traces its roots to enslaved Africans of the mid-18th Century. Chugging in a circle, their backs bent like field workers, they chant, clap hands, and bang on body and tambourine as their feet motor below. A leader pounds a long stick on the floor, adding syncopation.

African American ‘body percussion’ was born of social repression. Its origins, depicted in Drumfolk, are traceable to the Stono Rebellion of 1739, an uprising by a small group of enslaved Africans in South Carolina. As part of the Negro Act of 1740 (promulgated in reaction), Africans were wrested from the drums that galvanized their revolt. Finding innovation through anger, as Williams told The New York Times, “Our bodies became the drum.” That is the crux of the tale told in Drumfolk spanning a timeframe of 1739 to 2020. 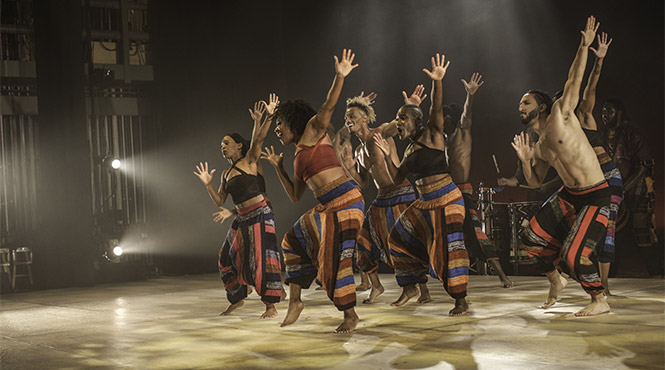 Step Afrika’s signature movement is stepping, the pulsing-and-precise, foot-stomping group-dance widely practiced in the fraternities and sororities of black universities since the early 1900s, as well as by churches, cheerleading squads, and drill teams. Featuring it in School Daze (1988), director Spike Lee, a Morehouse College graduate, brought the ritual to a wide audience. And now you see an explosion of nearly militaristic teams of steppers. “Prior to Spike, stepping as an art form wasn’t getting attention,” says Williams, a Howard University alumnus and a stepping member of Alpha Phi Alpha fraternity. “It had been left out of the conversation about black dance.”

Over the years both stepping and body beats have reappeared in more joyous contexts: in Motown’s line-dances of the ‘60s; in hip-hop starting in the ‘80s; and with today’s beat-box artists. Drumfolk combines all this dance-anthropology in a high-energy spectacle that isn’t just for history buffs. Its cross-generational appeal—and Sunday-matinee curtain time—make it a pageant perfect for families. 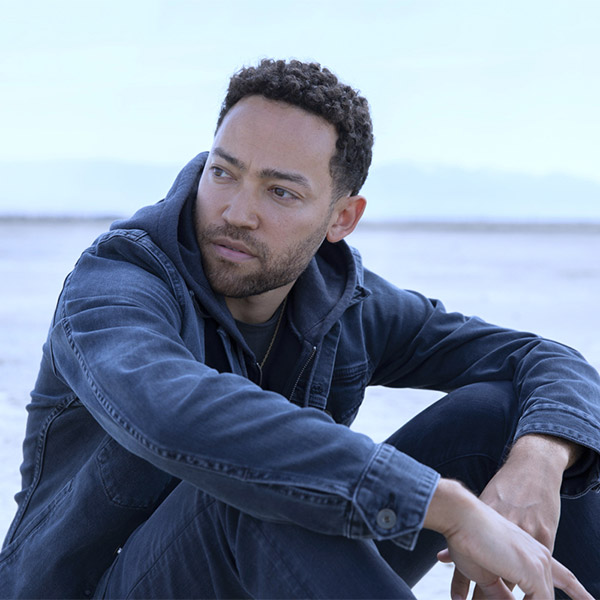 An added bonus on the program is Taylor McFerrin, the Brooklyn-based recording artist, deejay/beatboxer, and composer (he’s the son of the magical jazz vocalist Bobby McFerrin). Soraya Executive Director Thor Steingraber, who invited McFerrin to join the party, says “We paired Taylor with the company. Only The Soraya has this. We’re adding an L.A. vibe to the mix—while bringing body percussion into the present day.”

Another creative behind Drumfolk is the show’s director and primary choreographer Jakari Sherman, who is touring with the company as a drummer. So closely melded are the dance and drumming, says Sherman, that, “we call ourselves dansicians—we’re both musicians and dancers.”

Sherman, abundantly gifted, holds a degree in ethnochoreology, the study of the nexus of dance and culture. His archival research built on the work of folklorist Bessie Jones and ethnomusicologist Dr. David Pleasant in creating Drumfolk. “Stepping was not performative in its history,” says Sherman. “It was a way to express solidarity when there was not a lot of outside support for African-American culture or organizations.”

Culture and history aside, these performers are top-notch. Williams says that “many of the company dancers are highly trained in other forms; some are pure steppers.” Then he slyly adds, “No one can do this form the way we do it. I have some of the best steppers who have ever stepped foot onto a stage.” That may sound like a throw down; but the wildly enthusiastic response to Step Afrika at The Soraya in 2018 indicates that Williams is stepping on solid, if not sacred, ground.

Debra Levine is editor/publisher of arts●meme, the fine-arts blog she founded in 2008. A longtime dance writer, she has been published in the New York Times, Los Angeles Times, and Dance Magazine.
related event: STEP AFRIKA!
posted in: Stories   tagged: At The Soraya | Dance