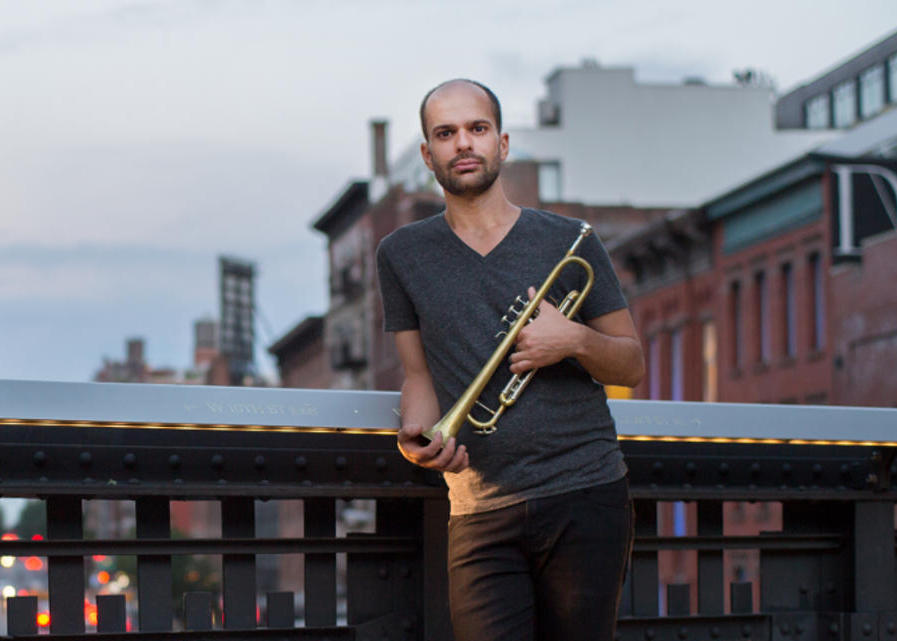 ‘Rivers of Sound’: From the Euphrates to The Soraya

Composer Amir ElSaffar, the innovative jazz trumpeter and director of the Rivers of Sound Orchestra, is calling his new work “a sonic embrace.” ElSaffar penned the expression to describe “Emergence,” a sound experience custom created for The Soraya’s lush acoustics. The concert by the New York-based musicians on Saturday April 23.

Emergence, ElSaffar’s new work, celebrates our return to in-person activities by physically placing his musicians around the auditorium—distanced from each other and yet also interconnected. Writes ElSaaffar in an artist’s statement: “It allows listeners to hear the subtle nuances of instruments like the oud, English horn, and the joza (Iraqi spike fiddle) acoustically and intimately.”

ElSaffar brings Arabic-influenced music into jazz in a bold way. With an Iraqi father and an American mother, ElSaffar extended his multi-cultural background to the study of music, melding jazz with Iraq’s maqam music. Maqam is a canon of Middle Eastern melodies based on ancient modal scales; they predate the Western tempered scale by centuries.

Noting maqam’s quicksilver melodic lines, ElSaffar says, “An Indian raga may be the closest form to maqam. They’re both musical languages that have cross-pollinated over the years. John Coltrane was one of the first jazz musicians to play modal music and to delve into it, and he connects to what I’m after in the larger sense. But when an Iraqi hears one of the maqam melodies, he’s instantly transported to a specific time and place.”

Rivers of Sound lives at the juncture of maqam and jazz, but ElSaffar says the new form transcends its musical score. “It’s also about the Tigris and Euphrates Rivers,” he says. “That’s where lands and cultures meet; it also represents my bloodlines.” He’s traveled extensively—to Iraq, Morocco, Tunis and elsewhere—learning firsthand the musical conventions underpinning his musical conception.

As a leader, ElSaffar's role models were Duke Ellington, Miles Davis, and Northern California saxophonist Hafez Modirzadeh. "What I liked about them," he says, "was their shared sense of openness and compassion. I try to exert direction, but to leave things as open as possible. I choose musicians because I love their playing and their spirits."

A typical Rivers of Sound piece will go through many tonal, textural, and dynamic shifts, but it always maintains a sense of flow. ElSaffar adds to the hand percussion on the santur, a Middle Eastern hammer dulcimer. "I like the idea of water," he says. "Water knows no boundaries; it can barely be contained. It can be static, or it can stream and rush. Floating or dynamic—I want both for my music."

April 23 at The Soraya will provide listeners with a worldly exploration, soulful introspection, rousing ecstasy and artistic mastery.

"My music has a lot of layers," admits ElSaffar. "At its core, my goal is to express my experiences—my life, ancestry, where and when I grew up—through sound, as it connects to the universal. I'm trying to communicate with maqam and jazz in a continually evolving way. As long as I've played music, I always wanted something transcendent. The word tarab means when boundaries disappear between artists and musicians. I think that's something we're all ready for."

Kirk Silsbee writes about jazz and culture. Published for many moons at Downbeat, the Burbank Leader, Glendale News-Press, Downtown News, and Jewish Journal, he can often be read at artsmeme.