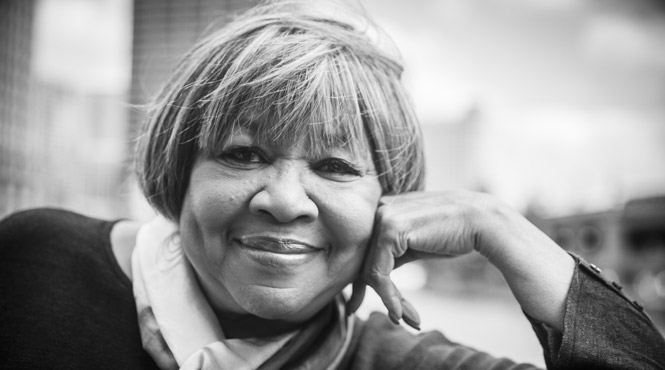 Mavis Staples: A Message at The Soraya

Mavis Staples has a message. It has been there down through the decades, as she soared across musical styles and genres, collecting friends, fans and contemporaries all across the globe. Her message is about GOOD. The good in spirituality, in honesty, in faith and freedom. And the good in the struggle itself reaching for our better angels.

Her voice is unmistakable, she simply has some of the most soulful phrasings ever heard; it’s a rough, tough, but gentle contralto embracing the listener making them feel what she is feeling. It’s something she’s been doing since the 1950s with her family group. Born in Chicago, where parents Roebuck "Pops" & Oceola Staples had moved from their native Mississippi, Mavis began singing with her family as a youngster. The Staples made their first appearance at Chicago's Mount Zion Church when Mavis was ten years old. A few years later, in 1953, they debuted with the self-released "These Are They/ Faith and Grace," on which Mavis and her father alternated lead vocals. Subsequent deals with the Vee-Jay and Riverside labels took the Staples into the mid-'60s, by which point their full-length releases included “Uncloudy Day,” and the first of the five Grammy-nominated recordings “Swing Low Sweet Chariot.” The latter was released in 1963, the year the Staples were newly motivated by meeting and speaking with Reverend Martin Luther King, Jr. — a turning point that fueled the family's involvement in the Civil Rights Movement and an emphasis on message songs. The Staples' horizons broadened with their relocation to the Epic label. In 1967, the group first hit the Billboard Hot 100 with "Why? (Am I Treated So Bad)," written by Roebuck, and a version of Stephen Stills' "For What It's Worth." Led by father Roebuck "Pops" Staples, the Staple Singers balanced gospel and secular music in a way unheard of before. They had eight Top 40 pop singles through 1975, including the chart-topping "I'll Take You There" and "Respect Yourself" — with Mavis on lead.

Outside the group, Mavis recorded solo albums for 30 years, right through the 90s and left her mark on music history in a way that is appreciated by artists the world over. Her fellow Grammy Lifetime Achievement Winner, Sam Moore (of the group Sam & Dave) commented “I have known Mavis for more than 60 years. Mavis is still traveling the world with that incredible Staple Singers family legacy surrounding her, bringing joy and the message she and her family forged over the many, many decades. I think it’s safe to say that I adore her!”

Mavis has been called a National Treasure by Billboard Magazine and that mantle rests gently on her 80-year-old shoulders. Honors, awards and praise flow freely. NPR calls her “one of America’s defining voices of freedom and peace.” She’s been installed in the Blues Hall of Fame and the Rock Hall of Fame. She’s a Grammy winner; a chart-topping soul/gospel/R&B pioneer; a National Arts Awards Lifetime Achievement recipient; and a Kennedy Center honoree. She marched with Dr. Martin Luther King, Jr., performed at President John F. Kennedy’s inauguration, and sang in President Barack Obama’s White House.

The performing road has been long and winding with many unexpected twists and turns, according to Cornelius Grant, writer, arranger and conductor for the world-renown Temptations. “We often played the same venues as the Staples and I made every effort to see them whenever I could. They were magic. Imagine how I felt when they recorded one of my songs, ‘You’ve Got to Earn It’. What a gift that was.”

It would be natural that gospel, R&B and blues folks would appreciate her and the family, but Mavis has another dimension that appeals to artists of every genre. Early on she became involved with rocker Bob Dylan, who told her father he wanted to marry her. Pops said, “Don’t tell me, tell Mavis.” She didn’t marry Dylan, but 50 years later, she recorded and toured with him. She’s collaborated with everyone from Prince to Arcade Fire and Hozier; blown away countless festival-goers from Newport Folk and Glastonbury to Lollapalooza and Bonnaroo; performed with The Band at The Last Waltz; and, been on all the most popular television shows, including Fallon, Colbert, Ellen, Austin City Limits and the Grammys, most recently in the tribute to Prince.

At a time when most artists begin to slow down some, it seems Mavis has hit another gear, releasing three albums and hitting the touring road on a schedule that would cripple artists half her age. It seems she still has a lot to say and sing, “I sing because I want to leave people feeling better than I found them,” Mavis said. “I want them to walk away with a positive message in their hearts, feeling stronger than they felt before. I’m singing to myself and for those same reasons too." Now that's a message worth spreading.