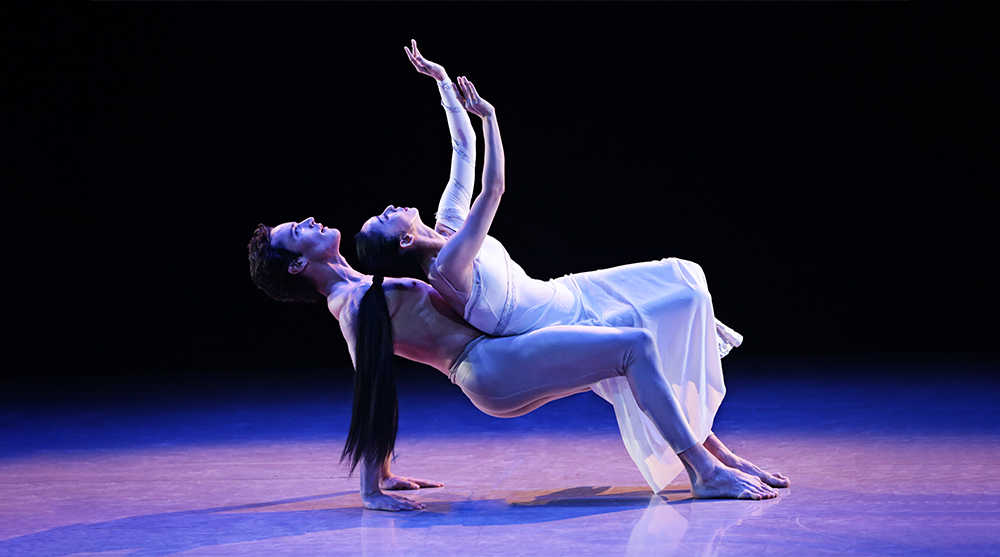 When Martha Graham premiered a new, full-company work with a poetic title, “Canticle for Innocent Comedians,” it was the Spring of 1952. John Martin, dance critic for the New York Times and Graham’s great champion, urged readers to attend. “Of course [“Canticle” is] the principal event of the week,” he wrote. Graham did not disappoint. She unveiled a work of unusual lyricism, as a quasi-mystical homage to the elements of nature—sun, moon, wind, Earth, water and fire—all cycling through death and rebirth. The work was a revelation. Martin called it “beautifully made” and “a tender kind of ritual.” Dance critic Anna Kisselgoff, reacting to a 1987 re-staging, called it Graham’s “great hymn to nature” and a work of “luminous strangeness.” The young Paul Taylor, seeing “Canticle,” said it was the reason he became a choreographer.

Life went on. “Canticle” went undocumented. Then it went missing. One incandescent section of original Graham choreography (‘Moon’) was filmed as part of the documentary “A Dancer’s World.” Artistic Director Janet Eilber tried to build upon that segment. “I was researching “Canticle” in hopes of bring it back,” said Eilber, speaking by phone from Indiana, on a road tour leading to Los Angeles. “I decided we couldn’t bring it back.”


Ever the saviour of gone-missing Graham works, Eilber said, “We [do] know what her structure was: eight virtuosic vignettes for the stars of her company, solos and duets, all connected by an ensemble weaving in and out of these vignettes.” Armed with that data, Eilber began her effort to re-fill Martha Graham’s footprint.

Cut to the West Coast, and enter The Soraya. On the heels of the theater’s vital role in reconstructing, in 2020, yet another lost Graham work, “Immediate Tragedy” (1936), Executive and Artistic Director Thor Steingraber decided to facilitate a similar effort for “Canticle.” Receiving this green light, Eilber got busy, vetting and hiring eight emerging choreographers. (She admits, “I always have my ear to the ground” for emerging talent.) The new version of “Canticle for Innocent Comedians” coincides with the 70th anniversary of the original, in 1952, and augurs an environmental dance-happening for the 21st Century.

The music for “Canticle,” by composer Thomas Ribbink, was lost. Steingraber suggested jazz pianist/composer Jason Moran, who had performed twice before at The Soraya. Known for collaborative projects with artists from varied media—theater, film, and visual arts—Moran has even partnered with skateboarders in a project for the Kennedy Center, where he is Artistic Director of Jazz. “I was confident Jason would be unburdened by “Canticle”’s history,” said Steingraber, “and that he would bring a fresh voice and embrace the challenge of collaborating with eight choreographers.” Moran will be in The Soraya’s Great Hall to perform his new score, live, with the Graham dancers, on the 19th.

A team of eclectic choreographers bring a gamut of dance languages to the nature-driven themes of “Canticle”: Chinese classical dance, Afro-Caribbean and athletic dance, street dance, hip-hop, rave culture, and modern dance. Emmy and Tony Award winner Sonya Tayeh is the lead choreographer and will create the prelude, finale, and transitions for the ensemble as well as the vignette titled ‘Sun.’ Kristina and Sadé Alleyne, Juliano Nuñes, Micaela Taylor, Yin Yue, and Jenn Freeman are other selected dance makers. The rules of the game were stringent. “They had to stay under three minutes, and create in just 12 hours of rehearsal,” said Eilber.

The name of one contributor tugs at the heartstrings. Sir Robert Cohan, the great, muscular former Graham dancer, who in the original cast danced the ‘Wind’ vignette, was Eilber’s special invitee. Cohan, a rare dance-world figure to have been knighted in the United Kingdom, had scant recollection of Graham’s choreography. Characteristic of his devilish sense of humor, as Eilber conveyed it, “All Sir Robert remembered was that Mary Hinkson was dancing ‘Earth’ and, as the wind, he whipped her skirt off.”

Eilber continued, “He was a venerable choreographer in his own right. He made this by December 2020, and he died in January. It’s an absolute treasure that we have this from him.”

Micaela Taylor, the Los Angeles contemporary dancer is in the mix, contributing ‘Stars.’ Speaking between rehearsals with her own company, TL Collective, she said, “I trained in Graham [dance technique] in high school and college. Graham’s core elements have been very influential to the way that I move now. My duet is very grounded, and involves partnering, connecting, and mirroring. There are moments of stopping and popping. I was asked to add the dynamic of speed, so my duet has an up-tempo rhythm.”

Moran’s music melds with Taylor’s choreography in the purest way, according to Eilber. “It’s beautiful, it’s solo piano, it’s poetic. It’s simple in the best way. We requested that Jason leave us a lot of space, and he has taken that to heart. Opening is simple chords, and the music for Micaela’s vignette, ‘Stars,’ is very sparse, while she is moving a mile a minute. The stars are twinkling, and we’re looking up at the sky.”

The program in this fifth presentation of Martha Graham Dance Company at The Soraya also includes: “Lamentation” (1930) and “Chronicle” (1936), each a masterwork, each with live accompaniment by Wild Up conducted by Christopher Rountree. “Lamentation” is the expressive solo much associated with Graham—seated on a bench, wrapped in a stretch-tube costume. To see “Chronicle,” a strident anti-Fascist work delivered by marching, barefoot women warriors, is always a life experience. It will be all the more stirring in today’s geo-political environment.