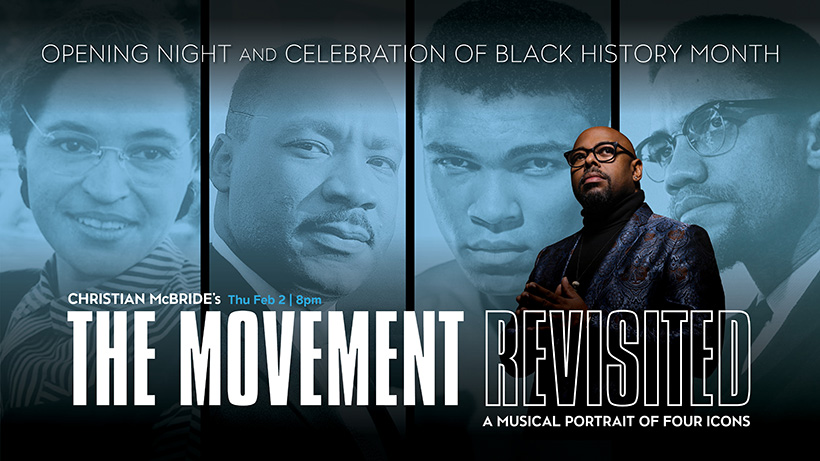 Jazz at Naz: Christian McBride expands “The Movement Revisited” to include Barack Obama on Feb. 2

Bassist and composer, Christian McBride possesses the uncanny ability to combine sonic textures with the urgency of critical moments in time. We see this on full display in “The Movement Revisited: A Musical Portrait of Four Icons.” This piece utilizes spoken-word, instrumental improvisation, and the resounding voices of a gospel chorus, to narrate the civil unrest of the 1950s and 1960s. It also possesses a powerfully timeless quality, connecting key figures of the past and present against the backdrop of the ongoing Movement for Civil Rights.

McBride composed this multi-part suite nearly twenty years ago to honor the pains and gains of four key Civil Rights leaders: Rosa Parks, Malcolm X, Muhammad Ali, and Dr. Martin Luther King Jr. He then expanded and rearranged the piece to culminate in a section dedicated to the election of Barack Obama. Each contrasting section is bridged by a series of interludes. The result is a thought-provoking message wrapped in a vibrant musical shell.

While creating this musical soundscape, McBride drew inspiration from his early childhood. He fondly recalls the impact of receiving copies of Ebony and Jet magazines from his grandmother.  The self-affirming images and detailed accounts of significant events cultivated a deep sense of curiosity and reverence, both of which are palpable in every section of The Movement Revisited. While unflinchingly detailing the adversity faced by these icons of the freedom movement, this piece also highlights the collective resilience of systemically oppressed people.

McBride isn’t a stranger to the Soraya, having recently appeared at this season’s opening night with The Joshua Redman Quartet for A MoodSwing Reunion. The Philadelphia native has been inspiring artists and audiences alike since he was presented on the national stage as a teenager in the late 1980s. While jazz has had its fair share of young prodigies, what immediately set him apart was the depth of his musical knowledge, expansive technique, and his overall musical maturity.

As a byproduct of a richly diverse musical scene, he was quickly noticed and utilized by the likes of Jazz Messenger alums Bobby Watson and Freddie Hubbard for their respective bands.  When the word began to spread about the “new kid from Philly”, he found himself in-demand by some of the most important voices of the genre, including McCoy Tyner, Herbie Hancock, Milt Jackson, Pat Metheny and countless others.  These experiences paved the way for the aspiring bandleader to emerge, resulting in a diverse catalogue of close to twenty albums that span a large spectrum of influences.