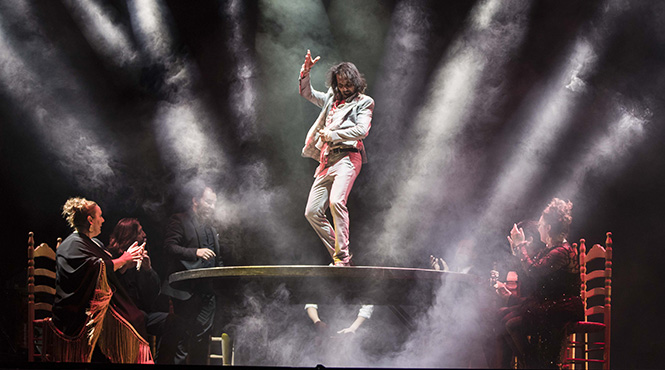 The brilliance was there from the start. At age 11, Juan Manuel Fernández Montoya, the reigning superstar of flamenco who performs under the sobriquet of Farruquito, appeared in Carlos Saura’s influential movie Flamenco (1995). Shot in silhouette by the legendary Spanish director, the lean, long-legged, and shaggy-haired pre-teen laid down a fusillade of sizzling footwork that still marks his brand nearly 25 years later. When, in exceptional film footage, the lad is joined in dancing by his (clearly doting) grandfather—the legendary flamenco master, El Farruco, who died in 1997—everything about the art form comes into focus. This authentic flamenco puro, virtuosic and unvarnished, passed through time and bloodline, Farruquito and his seven-member troupe will unleash at The Soraya on Saturday night, November 9.

By now a devilishly handsome and goateed 37-year-old (People magazine named him among the “World’s 50 Most Beautiful People”), Farruquito still deploys cutthroat, whipsaw legs and ballistic footwork. He teeters at the brink of stillness, then convulses into percussive forays, toying with the two polarities. He pulls back jet-black hair to reveal his moody, otherworldly expression. It’s drama, music, rhythm, and attack packed into one taut figure. It can even be scary.

Pausing from his preparations for an ambitious West Coast tour (he’ll travel between Berkeley to Tucson and El Paso and points between including The Soraya), Farruquito recalls his film work with Saura. “It was an incredible experience … sharing with my grandfather, and all the artists that Saura brought together,” he writes in an email from his base in Seville. “It was a very important experience of my life.”

He’s bringing to The Soraya his band of gypsies (three dancers including his partner Gemma Moneo, three singers, a guitarist, and a flautist) for a new show, Farruquito Flamenco, featuring his own original music and choreography. “For me, flamenco puro comes directly from the heart. It is based in passion and knowledge of the art form,” he says. “It can reach the soul – of those who know flamenco and those who don’t.”

Yes, it is soulful. The Boston Globe characterizes his dancing as, “no dry, buttoned-up affair,” but one that seems, “improvised in the moment — raw, visceral, and executed with blazing intensity and immediacy.”

The former child prodigy labors under weighty expectations, for example, a quote from the New York Times calling him, at age 18, “the greatest flamenco dancer in this new century.” Farruquito’s personal rubric for success, however, is more modest: “I admire the humble artists who succeed by going the way of truth,” he says.

“This profession is hard.” he continues. “You have to believe a lot in yourself while also not thinking that you know it all or more than anyone else. You have to be open to learn.”

The father of three children (a seven-year-old boy and twin four-year-old daughters), Farruquito has traversed a rocky path with significant setbacks, accidents, and detours by drawing strength from his heritage. “I think my grandfather would be proud,” he says. “He always told me that I should search for my own personality, and approach what I do with respect, knowledge, and dedication. And that is what I strive to do.”

Dance critic Debra Levine is editor/publisher of arts●meme, the arts blog she founded in 2008. Debra recently enjoyed her first byline in the The New York Times. She loves The Soraya.
related event: FARRUQUITO
posted in: Stories   tagged: At The Soraya | Dance