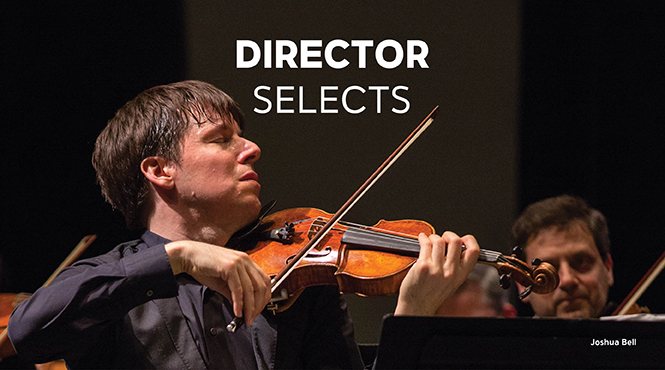 Please join us on March 10 to celebrate the return of Joshua Bell and Academy of St Martin in the Fields.

I can think of nothing that stands for our collective hope for the pandemic’s end more than welcoming back these exceptional musicians exactly two years later.

While Joshua Bell has been with us at The Soraya for seven performances, one in particular stands out – the March 4, 2020 concert in which Bell led Academy of St Martin in the Fields performing Beethoven’s Fifth Symphony. News of the impending Covid-19 crisis dominated the headlines, and Governor Newsom had declared a state of emergency earlier in the day. Yet no one could be sure when it would hit California and what its impacts might be. Cases statewide were just beginning to climb at 842. Certainly no one expected theaters were about to shut down for more than 16 months.

The Soraya was packed for the occasion. The feeling was one part nervousness and one part ebullience. The audience seemed to sense that the days of live performances were numbered, and yet people were still hugging and shaking hands, and there wasn’t a single mask in sight. The musicians were also energized, perhaps for different reasons. They were taking a victory lap as they finished a 40-city tour. The Soraya was, in fact, their final performance, and they must have been anxious to return home to Great Britain. In fact, many went straight to the airport after the performance to await their morning transcontinental flight.

The four most famous notes of Western music (ta-ta-ta-dum) were delivered without drama or ponderance. They seemed atypically triumphant. The pace was swift, interrupted by long ovations between movements. I later asked Bell if the tempo was unusual for him. He denied any knowledge of a fast rendition. Fair enough. Maybe it was just the mood in the room that shaped our perception of urgency. Of all the concerts in our history, I have witnessed few--maybe none--that received such a prolonged and enthusiastic response.

A week later, California announced statewide shutdowns, and Los Angeles County announced shelter-in-place measures. It became clear that Beethoven’s Fifth would be our final performance in the Great Hall. On March 20, after sending home The Soraya’s staff for the last time, I took a final lap around The Soraya making sure everything was secure. A final stop on the stage conjured hundreds of performances, and foremost the one that would make history as our last before the pandemic.