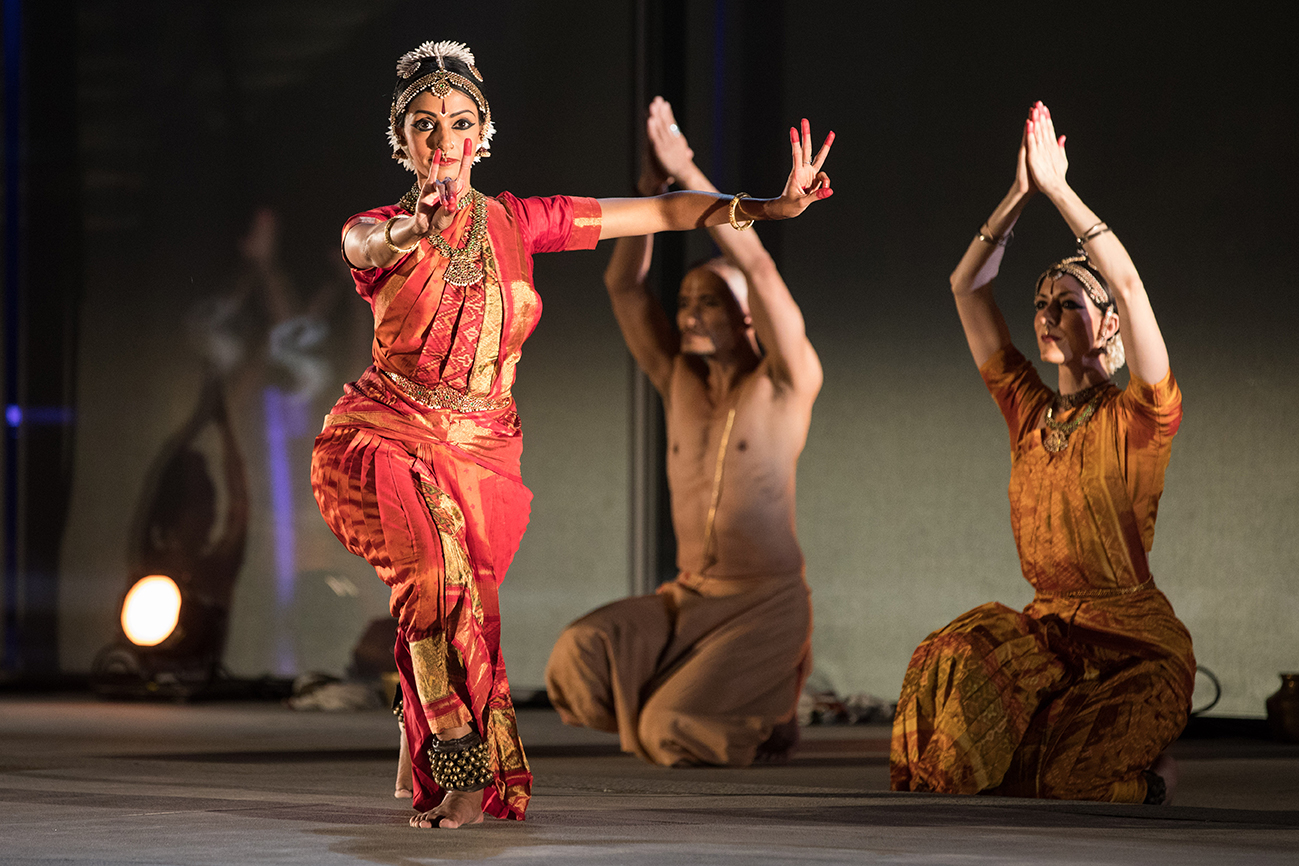 Accessing the Eternal Through Dance

The troupe’s return to The Soraya on Saturday April 9 features a much-anticipated event, the West Coast premiere of Fires of Varanasi: Dance of the Eternal Pilgrim, a co-commission of The Soraya and The Kennedy Center. The evening’s richly colored costumes, vivid makeup, and mystical musical accompaniment augurs a luminous dance journey for The Soraya’s audience, which has more than proven its keen appreciation of cultural journeys.

Fires of Varanasi is part of Music Knows No Borders, The Soraya’s series of handpicked performances that explores diasporic cultural expressions related to migration and immigration. The visionary behind this programming, Soraya executive director Thor Steingraber, remarked, “The journey of determined individuals seeking new opportunity or the plight of those tragically displaced is as relevant a matter today as any time in history.” In the tragic moment we are living now, seeing new waves of displaced peoples, these themes have even more relevance.

In Fires of Varanasi, Ragamala brings the flavor of ritual to the stage in an evocation of the eternal Indian city. Varanasi, ans ancient place of pilgrimage associated with the life-giving Ganges River, the powerful Lord of Destruction and Creation (Shiva), and the auspicious cremation grounds, is a site of deep connection to the continuum of life and death. The idea for the dance production evolved organically from the real-life  experience of Ranee and Aparna Ramaswamy.  Upon the death of Ranee’s father (Aparna’s grandfather), who was a devout Hindu living far from his spiritual homeland, the family endeavored to carry out his final wish—to scatter his ashes in the Ganges amidst those of his ancestors. This specific act inspired a choreographic expression of the ritual experience and the spiritual life that are part of their Hindu heritage.

Eleven dancers, some clad in brightly colored dance saris and others in simple white cotton garments of mourners, conjure a realm where the mundane intermingles with the spiritual, the contemporary merges with the ancient, and the rituals around death provide a path to transcendence. Narrative solos of dramatic and rhythmic detail interweave with enthralling ensemble work to create a multilayered, richly textured universe. 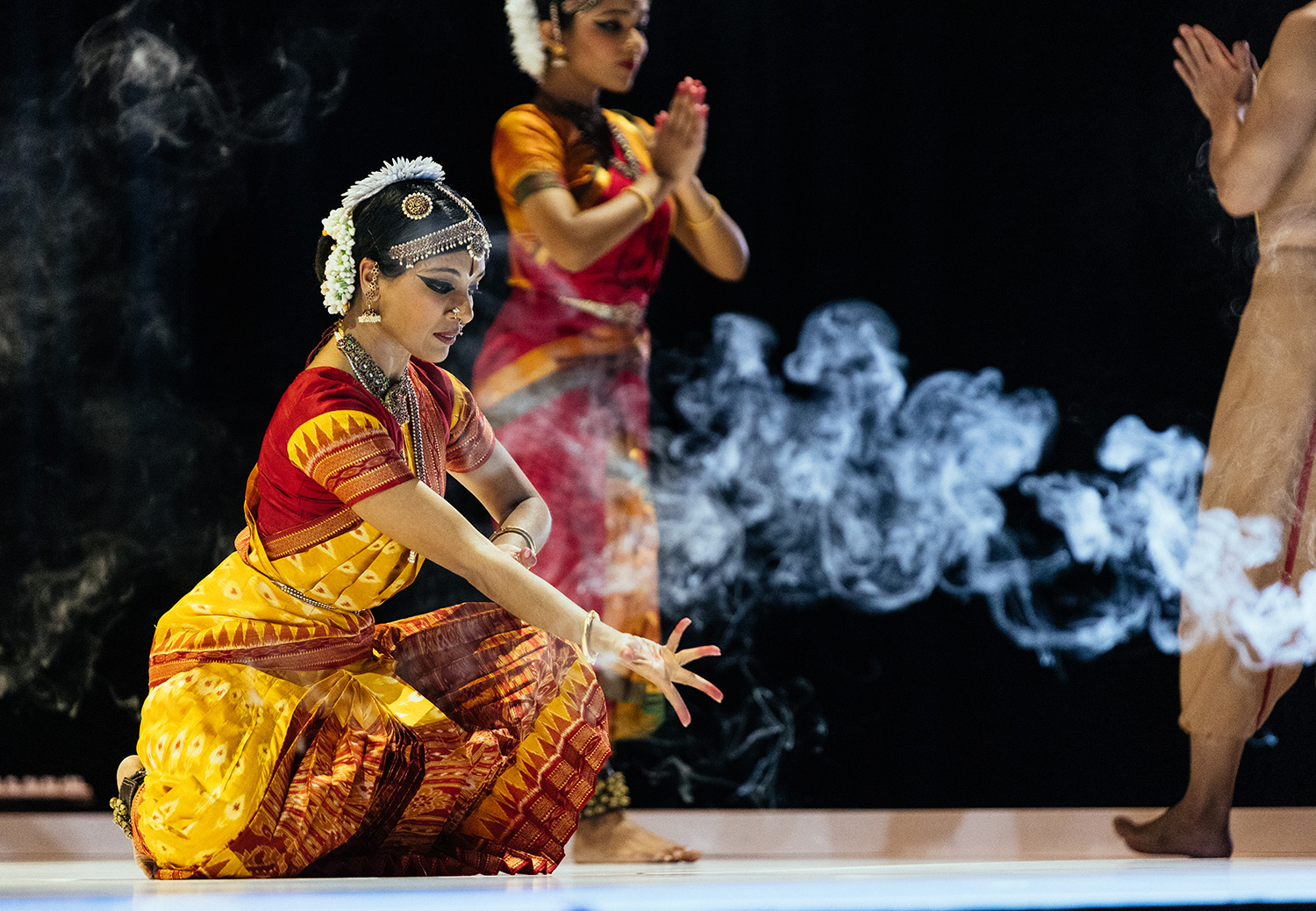 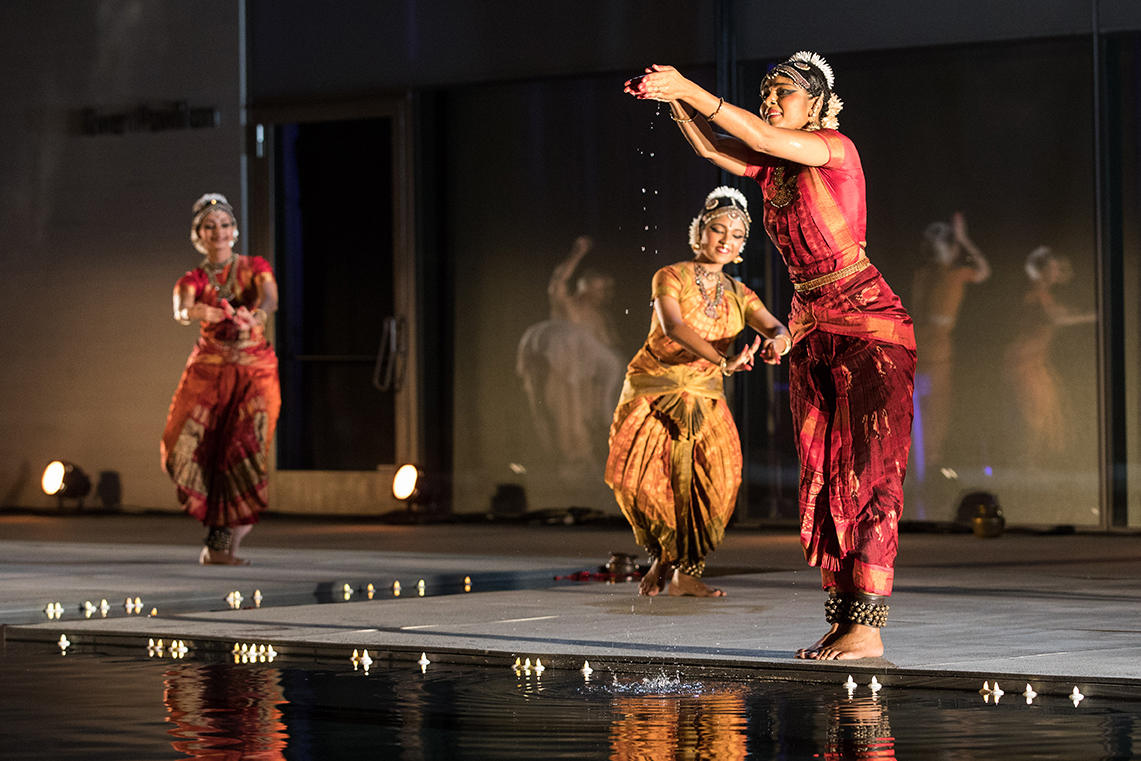 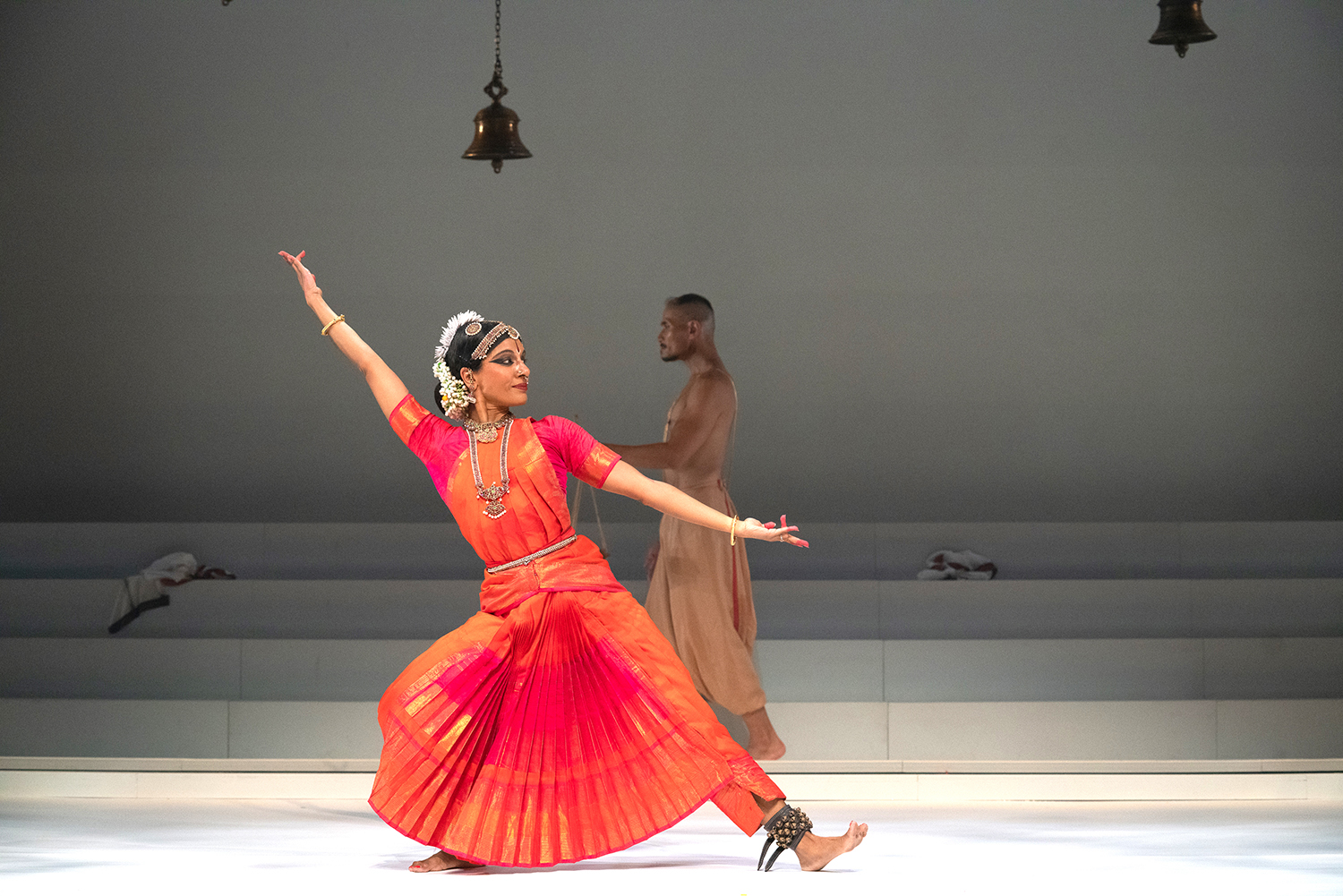 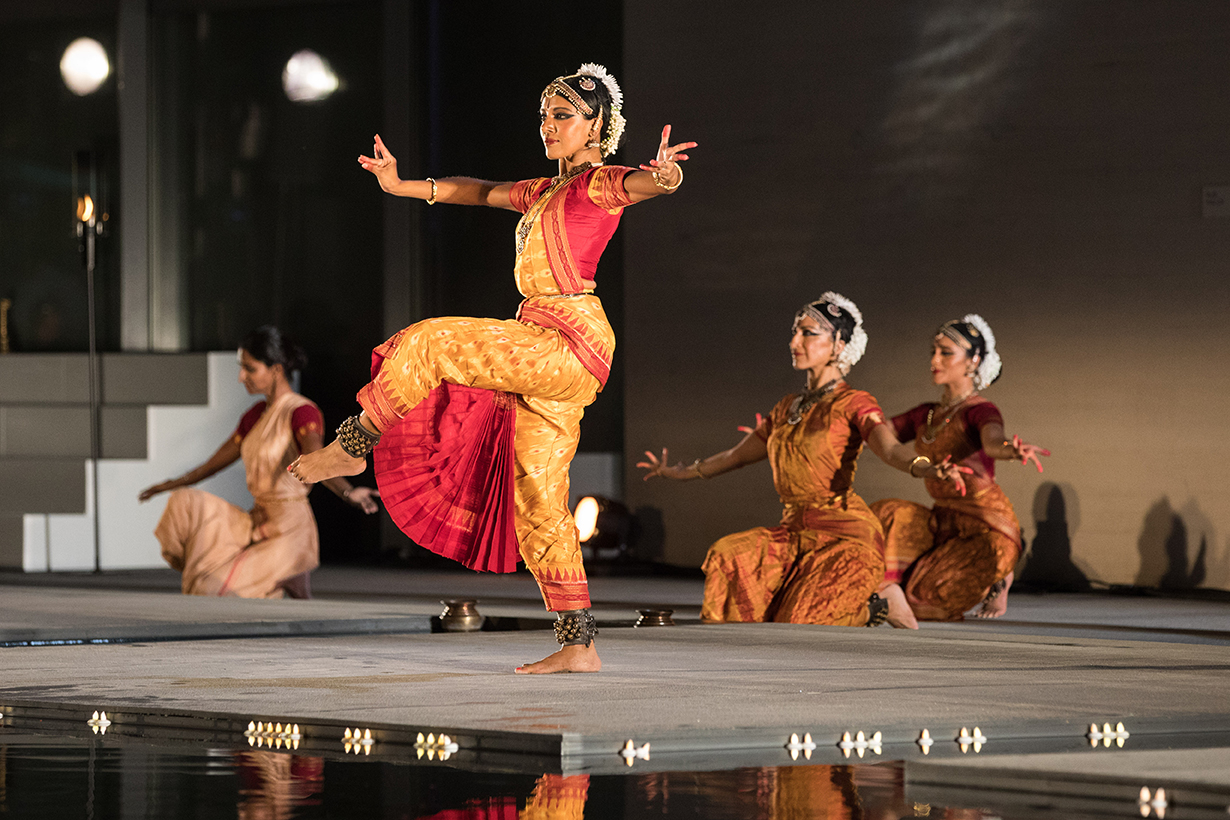 French designer Willy Cessa distills the sacred city’s visual essence with his scenic and lighting design. A wide staircase calls to mind the famous ghats, or steps, that descend from Varanasi’s temples down to the Ganges River. Three shallow rectangular pools of water provide a liquid matrix flowing with ritual activity. Brass offering pots emit billows of smoke that waft across the stage. Adorning the upper space, antique brass bells hang at varying lengths and offer a profound auditory experience.

The original, recorded score paints an acoustic landscape with chanted mantras to the drone of a harmonium, ethereal flute, violin, vocals, and percussion. (It’s worth noting that the captivating complexity of Indian dance percussion stems from three distinct sources ─ the drums, the dancers’ percussive footwork while wearing ghungroos (anklets with bells), and the nattuvangam, or rhythmic syllables recited while pinging the small finger cymbals.)

Speaking last week at a live and streamed panel discussion, “How Do Homelands Cross Borders?” hosted by Zócalo Public Square at The Soraya, Ragamala’s two artistic directors fielded questions. When asked about their intense allegiance to Indian cultural expression, Aparna Ramaswamy described how Bharatanatyam offers the possibility to evoke an “absolutely contemporary sense” and “mine the human condition through an ancient form.”

Perhaps not widely known to Western audiences, the Bharatanatyam dance form is a potent transmitter of cultural information--mythology, iconography, rituals, values, social behavior, music, dress, and more. The sharing of cultural traditions has always been a means to build bridges of understanding, remove barriers, and remind us of our common humanity. Now, more than ever, we need to learn each other’s dances and sing across borders.

Karen Greenspan is a New York City-based dance journalist with a deep passion for the movement and wisdom traditions from the East. A frequent contributor to Dance Tabs, Ballet Review, Natural History Magazine, and Tricycle among other publications, she is the author of Footfalls from the Land of Happiness: A Journey into the Dances of Bhutan.